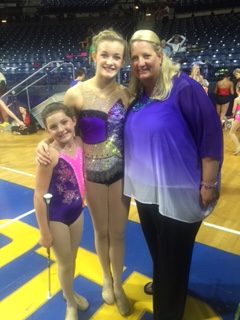 2018-marked the 25th year of coaching the Twirlettes by Head Coach Susan Usher.   She started her twirling career in a group similar to the Twirlettes in her hometown of Findlay, Ohio. She went on to be an accomplished individual solo twirler and a part of the famous team, the Findlay Majorettes.  Her best experience was being the Feature Twirler at Eastern Michigan University where in 1989 she won the Harold E. Sponberg award for the Outstanding Senior Bands person voted on by her peers.  She attributes her  success at EMU due to her peers, band members, and Directors.  Her career continued after college twirling for the Detroit Lions for 2 years. She graduated with a social work degree and worked in group homes, residential family homeless shelter,   community service organizations, and public schools.  Her career has been surrounded by children and loves to see the connections that can occur with positive environments.  Her passion for teaching twirling started at young age, teaching her 1st students as an 8th grader and went on to teach for her first instructor and many band camps across Ohio.  She started teaching in Michigan in 1990 where she taught the Chelsea Baton Corps and for several years taught both groups in Chelsea and Saline, including her current assistant coach Amie Branch.  Susan currently works for Washtenaw Area Council for Children, a child abuse prevention agency as an office manager and Body Safety facilitator.

Her proudest moments have been seeing the success and accomplishments of her twirlers and the personal relationships formed through twirling between students, coaches, parents and families.  Seeing the passion , commitment, and love passed on to the next generation is an ultimate reward and knowing you have given that to them is beyond anything else.

These are some top memories:  1st performance at the University of Michigan, seeing each twirl at their respective colleges, Miss Majorette of 2001, winning team awards in 2002, WORLD CHAMPIONSHIP in 1999, winning the 2009 & 11 Halftime show twirl champions, the finals competition of New Alliance Dance Twirl in 2012,  Collegiate finals in 2012, has been support team in 2013, Miss Michigan and Miss America 2013, having twirlers come back and teach for Twirlettes,2014 Performance at Notre Dame University, 2015 Marriage proposal between Kelsey & Nik, Minion team and Sirens of the Sea  and seeing a young twirler excited about a trick or first competition.  In 2017, the team took a huge step and entered into the show corps division. It was a big step to be in the corps competition and took many hours of planning, creating props, and the longer routine, but it was all worth it. The team won the Senior Small Show Corps with props title and went into the finals where they placed 2nd.  It was a truly proud moment along with 9 year old Hanna making the USA WORLD TEAM.

Twirlettes in the past and present  look forward to many more memories!!

Susan lives in Ypsilanti with her husband Jeff and 16-year old son Austin, a Saline Hornet.   They are avid sports fans and are the most patient people while Susan spends time with others.  Austin loves football and hopes to attend the Ohio State University someday. Austin earned his Varsity football letter in the fall of 2017 and continues his QB training during the off-season along with watching sports, playing video games, and working for the Ann Arbor Rec department.  Jeff enjoys all sports and GOLF!!

Missy & Susan have now worked together for over 16 years and had the opportunity to work with some of the best students twirling has to offer.  Together they have created championship teams and been a support system to each other as well as their solo twirlers.   “Twirling has brought us together for many special  moments. We love coaching and seeing where our students can take their skills when given confidence and guidance.” stated Susan.

The Twirlettes are privileged to have a team of staff that provide unique and personal opportunities to our twirlers on many different levels.